Well, the astonishing Tour de France bike race is over, and with it this year's Tour de Fleece ends as well. What a feat of athleticism that is, to race thousands of miles over three weeks, over mountain and flat, all over France and spilling into neighboring countries. All propelled only by legpower, and fueled by implacable will. And I imagine, by some pretty hearty evening meals.

Best of all, Lance Armstrong returned this year to the competition, and I was spellbound. I dreamed of the absolute fairy tale, seeing him once again on the podium in first place. But after three years of retirement, a late decision to compete, a broken collarbone, and the happy distraction of a brand-new baby, and at an age among the oldest of any of the competitors, he performed an astounding feat to return straight to the top ranks, where he finished in third. With the competitive fire in his heart, he adds immeasurably to the excitement of the race. For me, no doubt, this was the most exciting Tour to watch in years.

Maybe that accounts for why my Tour de Fleece output this year fell a little short of my goal. I was cheering Lance on, celebrating when he rode well, quaking when he fell behind, and only casually doing my own peddling and drafting. I spent more time pulling for Lance than peddling my wheel.

But I didn't do too badly. I'm a better and faster spinner than I was last year. I am able to just let go and trust my rhythm and end up with pretty good results. Here's what I ended up with for Tour de Fleece 2009. 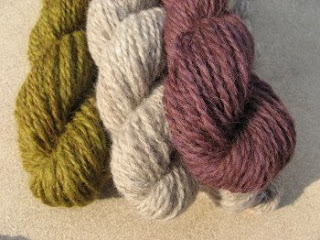 About three hundred yards of soft, soft worsted weight merino and alpaca in three coordinated colors. It might make a nice vertically striped scarf, but I'm thinking of another possibility or two as well. Regardless, it's a travel memento that reminds me each time I see it, of exploring the yarn shop in a delightful town in New Zealand. 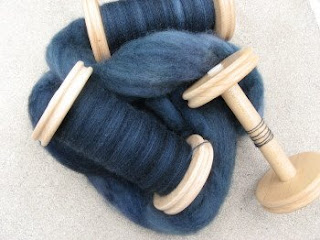 Two plies of the planned three for a sock yarn in Lisa Souza's hand-dyed Blue-Faced Leicester fiber. Since the Tour proper has ended, I guess you could say I'm a day late and a ply short. That's OK; I'm thoroughly enjoying this wool. This was my first time spinning Blue-Faced Leicester. I've heard spinners rave about it, and I think I'll have to join the chorus. It's really nice to handle. This particular fiber was utterly immaculate, with practically nothing in the way of little grassy bits to pick out. And in such pretty, deep blues.

I guess really when you come down to it, I did well in this year's Tour de Fleece compared to last. If I added up the yardage spun, I'm sure I did more than last year -- that sock yarn is probably in the range of 400 or 500 yards per ply. I'm certain the quality and consistency of the spinning is better. And, this time, I escaped without injury. Last year's tendinitis in my drafting hand kept me from the spinning wheel for about a month after the race. So all in all, it was a pretty successful Tour this year, for me.

And besides, Lance has announced he'll be leading a new team next year. Woo-hoo! Live Strong, indeed.
Posted by cathy at 10:20 PM No comments: 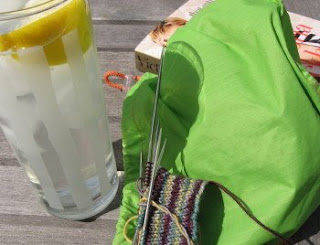 Why is it that, by late July, it sometimes feels like summer is already on the wane? Perhaps it's because the summer solstice in June is the longest day of the year, and the warm bright evenings shorten, a bit at a time, from that day onward. And yet we have almost two months of summer still ahead. Thankfully! 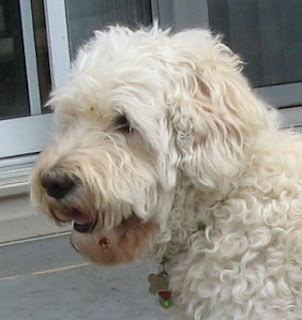 What's a girl to do but knit socks, indulge in some summer reading, keep an icy drink close at hand, bask in the sun, and enjoy the dog days of summer? The doggie is only visiting, but summer is made for socks.

Knitting them, not wearing them, that is -- at least in our climate!
Posted by cathy at 9:03 PM No comments: 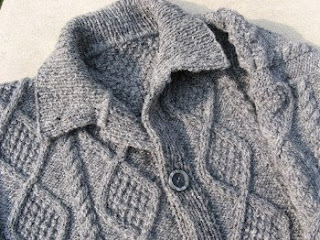 Yes, at last, my trim- athletic- dad's Cabled Jacket is done and in the hands of its rightful owner. And gratifyingly appreciative hands they are, too.

Why did I never think, all these years, to make my dad a sweater? (Other than because of the obvious hole in my head, that is?) I guess it just never crossed my mind that he would like to have a handknit sweater. Thank goodness he eventually dropped a mild hint or two, and the light dawned. 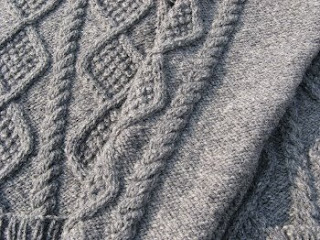 I'm so glad that it came out all right and that Dad is pleased with his custom- made sweater. It really is all his own. I used the Cable Jacket pattern in Rowan's Knitting for Him book as a jumping off point, but changed a *lot.* The original pattern is a blazer with notched lapels, set-in sleeves, and an asymmetric cable design in wildly different scales on the left and right sides. I did use the same aran-weight Rowan Scottish Tweed yarn and basic rope-and-moss-filled-diamond cable motif. But my version is a button-up jacket with dropped shoulders, fold-over collar, and a tidily symmetric cable design. So it's one of a kind, just for my dad. Being able to do that really is one of the beauties of our craft, isn't it?

I used US size 9 (5.5 mm) needles, going up a notch as usual to get gauge. I think I used about 10 skeins of the Scottish Tweed, as I have a little more than 2 skeins left over. The yarn in the aran weight has recently been discontinued, I believe. It's a shame, because it makes a nice rustic, masculine sweater without being too heavy (not that I expect to see my dad wearing it in the hot July weather around here, still). 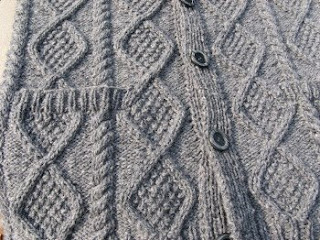 I also used the commod- ious inset pockets from the original pattern. I like those a lot, though I agonized over the placement, given all the changes I was making in style, length, and sizing.

In fact, when I make major changes from a pattern, I pretty much agonize over every decision. I don't know why the stakes seem so much higher then. After all, even if I follow a designer's pattern faithfully, it could easily go wrong in some way and not fit or not look right. Ah, but then it wouldn't be entirely my own fault, would it?

But when I muck up a pattern or dream one up on my own and it goes right, there's nothing to beat it. And this one? It's done! It worked! It fits!

It's July, and that can only mean one thing. It's one of the highlights of my TV-viewing year. The spectacular Tour de France bicycle race. Three solid weeks on the edge of my seat, especially now that Lance Armstrong is back in the saddle -- hooray!

Last year, I discovered the spinners' companion event, the Tour de Fleece, and that just added to the fun. So Rastro and I are off again and running. Now that we have another year of experience under our belts, the spinning doesn't take as much concentration, so I think it's going to be an easier three weeks this year. And no tendinitis this time, I hope! Once again, my spinning challenge goals are a little loose and slapdash, but who cares, as long as I'm spinning every day and enjoying it? 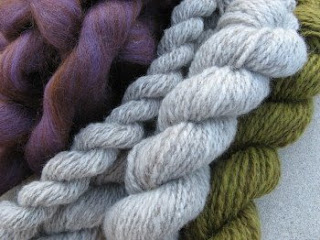 For the first few Tour de France stages (days of racing), I'm spinning this lovely stuff. It's merino and alpaca that I brought back from New Zealand. Can you tell how soft and lovely it is?

It's actually the first spinning fiber I bought, other than a little Brillo pad of coarse fiber for learning with my spindle. A little later on, there was the practice Coopworth wool (that eventually became the Cannonball sweater) and a sweater's quantity of Finn wool (still waiting for me to feel I'm ready) that I bought right along with my spinning wheel. And later still came the excitement of all the amazing fibers to be found at the festivals. But when I wandered into this shop, I was still just getting the hang of the spindle and only beginning to dream of having a wheel. It was very novel then, when I came across a bin of spinning fiber in a yarn shop, to think, "Wait a minute; this is not something only for other people. It's something I can buy, because I'm learning how to spin!"

Feeling ready to actually spin it was another matter. I didn't feel worthy of such nice fiber for a long time. Now that I'm confident that I can do a decent job with a soft, pretty fiber and not risk botching it, it's a real pleasure to dive in and play with it. 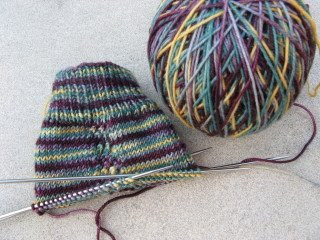 I've also started a sock. Because I've gotten over a recent spell of being kind of tired of sock-knitting. And because a sock on the needles is just generally a good thing to have. This is Socks That Rock lightweight, in the Scottish Highlands colorway. In the skein, it's really beautiful. But in the wound-up ball, it got a little circus-clown looking, I thought. I wasn't at all sure what to expect when the knitting started. It's working out to be a hearty, regular stripe, with no pooling. Not a subtle look, but pleasant, and entertaining to knit.

The pattern is Dublin Bay (available free on-line from Mossy Cottage Knits, here.) It's a nice pattern, mostly plain, but with a simple lace pattern down the sides to give me something to do every couple of rows. The lace doesn't really show up as openwork against the bold stripes, but it does create a visual break. So, full speed ahead.

Yes, I am also still working toward starting on the Chanel-ish jacket with my 3-ply handspun. I haven't abandoned it; I'm not that fickle! Besides, it's the Tour de Fleece yarn I spun last year, so it seems entirely appropriate to get it started now. I'm hard at work with sharp pencil and graph paper, mapping out the pattern stitchcount by rowcount, plotting increases and bind-offs, so that I can recalculate all those little counts for much bulkier yarn. This is not a particularly photogenic process, though. And somehow, it always seems to go so much faster when they do it on TV.

Good thing I have the Tour de Fleece spinning and the new sock, for when I need a break. :)
Posted by cathy at 11:52 PM No comments: