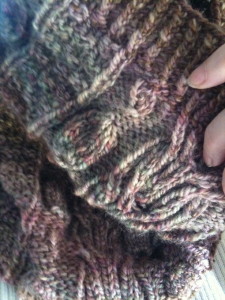 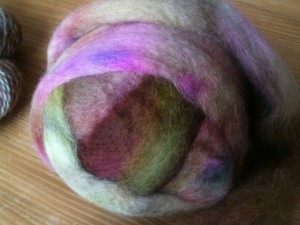 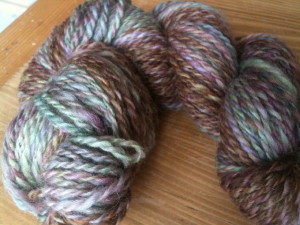 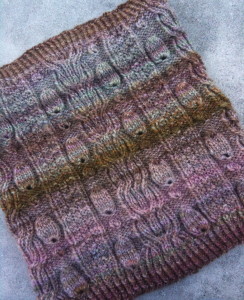 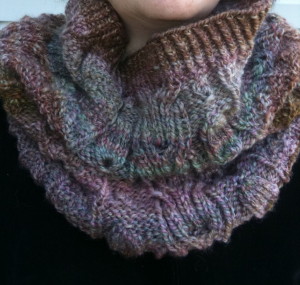 I hope everyone had a nice holiday season. I did! In the rush leading up to it, I never know if I'm going to make it, but somehow just enough of everything all comes together just in time. And again this year, though I never seem to come close to matching the impossible dream in my head, I managed to get the tree decorated, cards out, presents bought and wrapped, and even a little Christmas baking done.

And in the midst of all of this, there was time for just a very modest amount of Christmas knitting. I didn't do a lot, but I did at least make a sweet little scarflet for my tall-elegant-mom, and a hat and neck-warmer set for Yarnstruck-nephew-the-eldest.  The first was because I always try to make at least a little something for my mom, and the second by semi-request.  (My trim-athletic-dad didn't fare quite as well; his as-yet unknit socks were bestowed on him in pristine form, as a completely untouched ball of yarn. :) 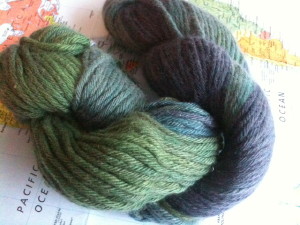 Time was rushing onward, and I knew I wanted to knit something for Mom, but I didn't know what.  In the past I've made her stoles, scarves, shawls, gloves, hat, a sweater, and socks -- lots of socks -- all of which she makes valiant efforts to wear regularly. This time, I had no plan, but I did have a lovely skein of Jade Sapphire Mongolian Cashmere 6-ply squirreled away, in the Oceana colorway.  I'd bought it on a vacation a few years ago in Seattle and never quite come up with the right little project for it.

I'd always thought these colors would be nice on Mom, but what to make? One skein of worsted weight, however precious, would be of necessity a small project. I hit upon the idea of a  little scarflet that could give just a hint of warmth and color at the neck, where cashmere's softness would be most appreciated. 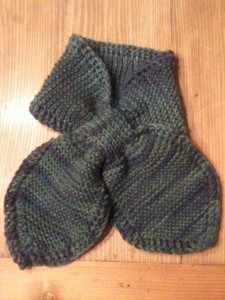 I ended up choosing a style that's often called a bowknot scarf.  It has a built-in loop on each side, cleverly constructed by separating the stitches into two layers and then rejoining, so that either end can be tucked through the other, neatly and securely.  There are quite a few patterns along this general model, but the one I used is Marci Richardson's version, from Judith Durant's 101 Designer One-Skein Wonders book. Like the others, it's in humble garter stitch (which does make it springy as to length and not prone to rolling), but it also has some nice refinements, like a simple eyelet trim along the edges.

I made some minor changes to make it suit my mom (I hope) a little better.  I lengthened the two ends of the scarf by an inch or two to give it a more substantial look. I narrowed the band around the neck slightly so it won't bunch up or fold over and will be a little better for full-time wear, rather than just for venturing out into the cold.  I hope she'll enjoy having a small soft accessory that's easy to wear casually. Cozy, but not so warm you'd hesitate to reach for it unless the wind is really howling.


As for the requested item, that one tickled me.  Once, I made a pile of thick hats in cheery school-spirit colors, and gave them out to the Yarnstruck nephews (among others).  Well, what do you know, they wore them, and it seems they quite liked having a warm thick hat to wear on really cold days.  Two years later, Yarnstruck-nephew-the-eldest had moved on to college and needed a warm thick hat in a new color scheme. Well, no knitter on earth could resist the call to replace an appreciated piece of hand-knitting with another when the need arises.  It was Auntie Yarnstruck to the rescue!

If the original hat fit Yarnstruck-nephew-the-eldest and he liked it, well, I wasn't going to mess with success. I was going to do my level best to replicate it, materials, fit, styling, and all.  Everything would be just the same but the color. I ran right out for the same yarn as last time, Lion Brand Wool-Ease Thick and Quick, to knit with big US size 11 boat oars.

The pattern was of my own concoction, but, no problem, I just needed to find the little scrap of paper where I had noted down the details. When I got a little time, I launched a search into the pile of little and bigger scraps and sheets where I've noted down lots of my original patterns but never written them up properly.  There sure were a lot of scraps and sheets.  This was taking longer to find than I thought.  In fact, I couldn't find it.  Uh-oh. I knew I'd written down the details on one of these scraps; I actually remembered transcribing them from an even smaller more tattered scrap of paper.  But I couldn't find it anywhere. I went through books, notebooks, drawers, and dug down to the deepest darkest bottom of my piles of yarn. I spent a couple of hours turning the place upside down.  I couldn't have searched more thoroughly if I'd brought a bloodhound with me. No scrap of paper. Oh, no.

Now mind you, my little hat pattern wasn't anything to set the world of hat patterns on fire, but I knew it had worked once, and I just wanted to knit it again.  I could have picked a pattern from one of the many (really! *many*) knitting books on my shelf, and adapted it for the yarn, and it probably would have been fine.  But it wouldn't have been identical to the original one, and identical is what I was going for. 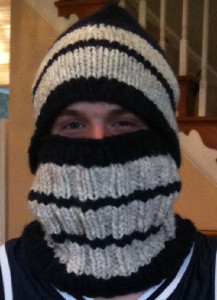 Hard times call for tough measures. At least I had taken a good picture of the original hat, a complete side view, smoothed out flat. I reverse-engineered my own hat design from the photo, stitch by stitch, and used it to knit the new hat.

There was plenty of yarn left over, so I made a ribbed cowl/neck-warmer to match.  I have to admit, this isn't quite how I pictured it being worn.  (It actually looked quite nice pushed down around Yarnstruck-nephew-the-eldest's handsome chin. :)  But, come to think of it, on a good freezing day, it's probably exactly the right way to wear it.

This time I wrote the whole thing down carefully.  And put it... somewhere. I'm sure it will turn up.