Up to My Armpits 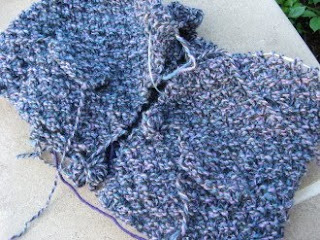 I've been busily working on the Chanel-ish Cardigan in bulky-weight handspun. It doesn't look like much yet, but on the whole I think it's coming along fine. My gauge seems to be pretty much as predicted from the swatch I knit, which means the jacket will be more or less the size I'm aiming for, all good news.

The jacket is knit from the bottom up in one piece until it splits to make the armholes. I've just about reached the splitting point now. There are pockets knit in along the way -- you can see the pocket flaps in the photo. (To help sort out what you're looking at, other than a generally messy blob of knitting, the north of the jacket is the upper right of the picture.)

The pockets did pose a minor dilemma along the way. They are not anchored like patch pockets to the inside, but hang loose inside as separate pouches. I'm guessing this is to keep from interfering with the way the jacket hangs smoothly in the front. But it does mean that where each pockets is, there are three layers of fabric -- the jacket front itself, and two layers of pocket lining. With a bulky-weight yarn, I thought this would add up to quite a thick wad, which might in itself interfere with the smooth line of the jacket. 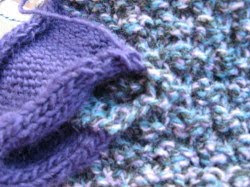 After pondering this for a while, I decided to make the pocket linings out of a lighter weight yarn to slim them down. Since the pockets are knit in instead of sewn on, that meant an interesting little challenge of changing stitch counts to match the width at the opening, but all worked out, thank goodness. Of course, there was not the ghost of a chance of finding a worsted-weight match for this crazy tri-colored marled handspun yarn. So I used a contrasting but (I hope) sympathetic solid color left over from a long-ago sweater project. I did think about using black, especially since the plan is to finish the sweater with a contrast edge in black or charcoal. But where's the fun in that?

Still, I hope the jacket won't gape open too much at the front, because a glimpse of that wild pocket inside could be eye-popping. :) Back to work now.
Posted by cathy at 11:58 PM 2 comments: 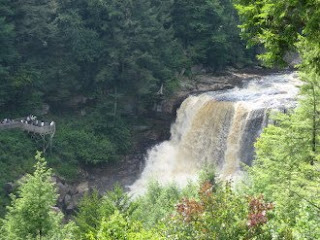 World's-most-patient-husband and I got away from our normal haunts for a weekend recently. We journeyed to Blackwater Falls State Park in West Virginia. What a beautiful place. So distant from the bustle of our daily life. Only the rustle of the brush and the rush of the water.

The falls are powerful, and the water is stained "black," evidently, by tannin from ancient trees. 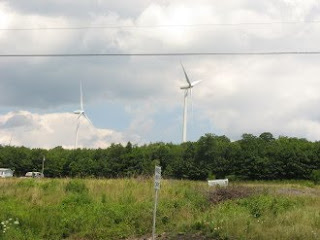 On the way to the park, we saw signs of energy production old and new: coal mines and windmills. I didn't realize that we had windmills already in operation in this part of the country. Yet here they were. These things are enormously tall.

Later, as we drove around, we had dramatic views of a whole bank of them along a ridge against the sky.

Once we arrived at the park, we got to the falls by a hike through dappled woods, with moderate terrain, lots of mud, and even a bit of scrambling up and down rocks. It was only a mile or so each way from where we began, but harder work and a longer time than I expected. 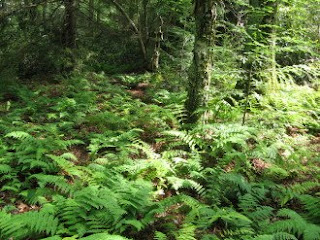 I don't know why I forget that ferns are a woodland plant -- I know they didn't evolve simply by living in pots -- but here they were in profusion. The path grew iffy at times, and we missed seeing the yellow blazes that marked it. The beautiful surroundings seemed almost spooky then, when we looked around and saw trackless woods in every direction. But we knew we weren't far from the road into the park and could have clambered across to find it if we had to. That didn't turn out to be necessary, as we managed to backtrack and find the path again each time.

If I were a skilled dyer, I would have been inspired with lots of new colorways. I saw them everywhere, in the mosses and barks, in the stone, and sometimes in strange red mushrooms. As we left the park, tired, hungry, and ready to head for the town where we would stay that night, expecting to settle for fast food or a chain restaurant for dinner, we spotted a surprising and welcome sight: a brewpub. World's-most-patient-husband slewed the car around instantly. I don't think we squealed the tires.

And Blackwater Brewing Company is quite a good brewpub, with the brewing equipment right there behind the bar, excellent ales, and a specialty in good German food. I had a very nice porter, most fortifying after my afternoon walking in the woods.

We were even more surprised, as we drove away later, to see a second brewpub beckoning within a few miles. We really hadn't expected such a rural area to have so much quality beer to offer. We were ready to make a beeline to our hotel, though, for showers and relaxation, so we didn't stop and can't vouch for that one.

It was just an other-worldly and refreshing day and the kind of thing we should do more often.
Posted by cathy at 9:48 PM 2 comments:

Summer Knitting -- What Else?

What Else But Socks?

I've finished off a few socks that I haven't shown off properly yet. Some of these were actually knit in the spring, but socks do make good summer knitting. They don't demand too much attention, and are small enough not to block too much sun when I'm outside basking in the warmth. And of course, in the torpid summer weather we get around here, they're a lot more appealing than a big woolly lapful of sweater-in-progress! 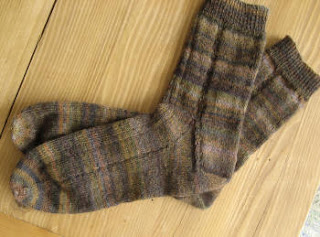 First up were my good-humored-brother's Christmas socks. (As I recall, I joked that I expected to be finished with my Christmas knitting by about the 4th of July. Some joke, it turns out!) These socks are my own design; I call them Sidecar Socks. They're knit with Trekking XXL on US size 1 needles. My brother seemed to want something pretty plain, so I kept them as simple as I could stand. Even so, I couldn't resist giving them a little ribbing down the front and clocks to their sides. They're with their owner now, and I hope they fit. But in the hot weather, I didn't have the heart to demand that he try on his new woollen socks.

The bad news about knitting large men's socks is that they take more than the standard 100 grams of yarn and I end up scrambling for more. Some yarn-shopping day, maybe I'll remember that large men's socks are best knit with yarn that comes in 50-gram skeins so I don't need to buy so much extra. 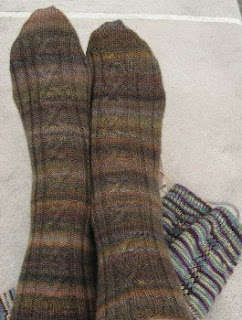 The good news is that I tend to end up with plenty of leftovers. Which means... more socks for me!

This is another pair of my own design. I call these my Blackthorn Socks. It's the same Trekking XXL yarn, of course, and US size 1 needles again. I really like the color variation in this yarn. It's brown, but there's a world of purples and greens and golds in there if you look closely. I entertained myself with a little more decoration and a few slightly tricky features on these. 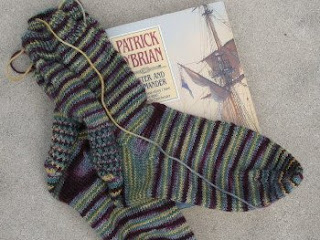 And bringing up the rear are these. This is the Dublin Bay pattern, knit in Socks That Rock lightweight in the Scottish Highlands colorway. Clearly I have some sort of pan-Celtic thing going on here. I enjoyed the colors, and thought of gorse and bracken, heather and brooding mountains as I knit. The high-contrast striping was entertaining and created a particularly nice effect in the eye-of-partridge heel that the pattern called for.

Of course, with a high-contrast striping yarn and a standard gusset-heel sock design, there are hazards. When you turn the heel and pick up the gusset stitches, you change the number of stitches in each round. And as you gradually decrease back to the original stitch count, the color repeats that create the stripes are drifting around, until almost inevitably -- eek, a splotch! 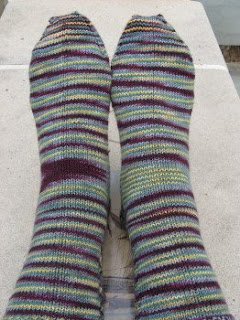 Well, phooey. Why get excited about it? Just bring on some more iced tea and summer reading, and we'll all be fine.
Posted by cathy at 12:10 AM No comments: