Taking Her Out For A Spin

Well, what's a tiny little new spinning wheel for, if not to hop in the car and go for a spin? Miss Muffet and I f 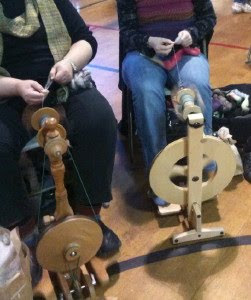 ound ourselves a spinning event to go to and that's exactly what we did.

When we got there, she settled right in next to a Majacraft Little Gem. It's also a cute little portable wheel, but we all have our own tastes, and Miss Muffet is definitely my favorite flavor. The Little Gem's owner (whose name I'm sorry I can't remember) was also a brand-new weaver, and the scarf she's wearing in the picture was one of her first efforts, woven earlier that same week. It was beautiful and drapey, and I was quite impressed.

The event was kind of a small fair, with vendors from the local region lining the walls, selling yarn and roving and fleeces and patterns and accessories and lots of tempting things. It catered for knitters as well as spinners. 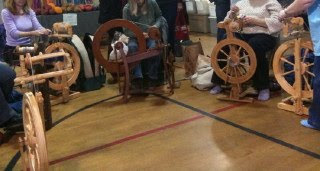 The spinning circle was set up right in the center, and it was a new sight for many of the knitters wandering by to shop. It felt a bit like being on display at a living history museum. Quite a few people stopped by to watch, talking in hushed tones to each other. With a little encouragement, though, they were happy to chat and ask questions. The woman next to me, with the Little Gem, was quite a promoter for spinning. She enticed several people to sit down and give it a try. I wouldn't be surprised if a new spinner or two was born that day! 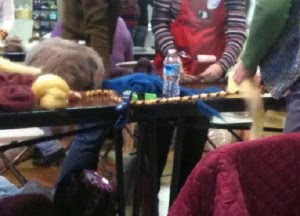 When I got up for breaks, there was also another "exhibit" for me to gaze at and ask questions about. Near the spinners was a group having a rug-braiding class. It looked like fun, too. Though I'm afraid this isn't the clearest photo, you can see how there's a clamp attached to the table, and the rug-maker is braiding together strips of roving in different colors. The rug-making is not a one-day process, though. Students were to take the braids home, felt them, and come back to the part two class, to learn how to sew them together. 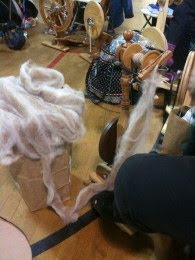 , there was lots of shopping going on, too. You don't need a giant festival to have plenty of things to entice a spinner. I think practically everybody went home with a few more things than she brought -- some more than others. And some just couldn't contain themselves. This big newly purchased pile of fiber was trailing directly from its bag onto an enthusiastic spinner's wheel.

Of course, I also walked around and window-shopped to see what the vendors had brought. And of course I had to get myself a few goodies. :) 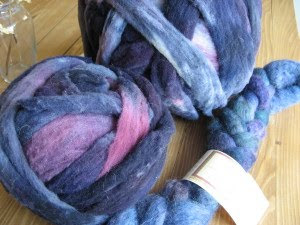 These are some of them. The two balls of roving are Cormo wool from Wallys and Frank Peltier at Mt. Airy Farm, in Marshall, Virginia. I just adored the colorway and bought all 14 ounces they brought. It probably won't make a whole sweater, but maybe a vest. I believe I must have been talking to Wallys. She told me that they hadn't dyed the wool in roving form before, only as yarn, because they'd been worried about whether it would felt. But she was pleased with how this had come out. And so am I. :)

The braid in the front of the photo is Superwash Bluefaced Leicester from Spirit Trail Fiberworks, Jennifer Heverley. Jennifer -- in addition to finding wool of fascinating rare breeds to offer spinners -- is a master dyer with an absolutely lovely color sense. 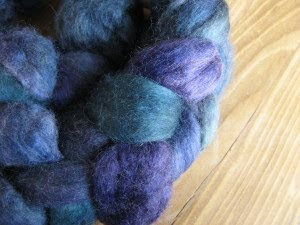 This braid is a one-off; not one of her regular colorways but just the result of a session playing with the dye-pots. I could just drown in these colors. But there's only 4 ounces of it, so I'll have to think about what I can make from it.

All in all, a very fun day. Miss Muffet and I went home tired and happy.
Posted by cathy at 10:04 PM No comments:

I've been beset with a raging case of spring fever. Why? Of course, there's the bright sunlight, and the longer daytime hours, and the balmy breezes. Those do their share in setting off plenty of cases of spring fever, that's for certain. But I'm talking about my spring fever, and that's spring spinning fever. For that, there just might have been one more factor that came into play. 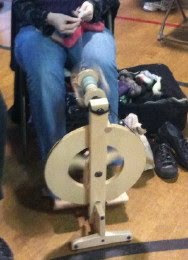 Look, over there -- what's that twirling daintily in front of my ankles? It isn't Rastro, my trusty and beloved Lendrum spinning wheel. It's something a bit smaller. Positively petite, in fact. Yes, it's an adorable little Louet Victoria, my wonderful Christmas present this year from world's-most-patient-husband. I feel like the most spoiled girl on earth. :)

Much as I've always enjoyed spinning on my Rastro, I had started daydreaming about also having a second wheel that would be a little easier to cart around, to take outside, to carry off to spinning events. Maybe even to take on a plane, if my spinning mania ever comes to that. :)

I saw the Victoria at a fiber festival back when the model first came out. I was fascinated by how small and light it was. At the same time, it had a decent range of ratios, and the woman showing it off assured me that it spun like a serious wheel, not some little plaything. At the time, I really didn't imagine having a second wheel for myself. But as time wore on, the thought slowly seeped into the back of my mind, eventually taking shape and filling out and becoming a full-fledged wish. Finally I started hinting and hinting to world's-most-patient-husband who -- while he still no doubt thinks it's nuts to have one spinning wheel, let alone two -- loves to do things that make me happy. 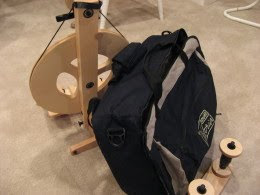 And when Christmas rolled around, there she was, Rastro's new little sister, Miss Muffet. She came with the greatest little case, too. She folds up and fits in there like a puzzle, and then I can throw the strap over my shoulder, and off I go.

Miss Muffet is actually only the second wheel I have ever spun on. I've heard all the good advice, of course, about trying out different wheels before you buy. I'm just not very good at following it. :) Both times, I've made up my mind on the wheel I want without ever having sat down to give it a try. So it's been very interesting for me to note how different Miss Muffet feels to spin on. All the skeins I showed in the March 31 post were spun on Muffet. While Rastro feels solid, comfortable, and smooth, Miss Muffet is a tricksome little thing, with the jittery, jouncy feel of a fast dune buggy. Now that I've got the hang of it, it's great fun.

So the spring fever is a little aggravated this year. Rastro sits in the prime spot, right next to my giant supply of spinning fiber, and gets plenty of action. Miss Muffet perches here and there around the house and gets popped in the car for an outing when I come up with any excuse. Rastro does the yeoman's work on big projects, while Miss Muffet spins frivolous little braids of fiber for fun. Did I mention that I must be the most spoiled girl on earth?
Posted by cathy at 10:55 PM 1 comment: