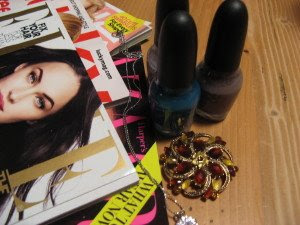 Sometimes my enthusiasms crowd each other out for a while. Something has set me off lately, and I've been having tremendous fun taking an interest in a bunch of silly, frivolous things -- more than I have in a long time. Hair! make-up! music! shopping! All things I've loved and devoted plenty of time to at other times, but that seem to have been pushed to the back for a while. (Wait, could the non-stop knitting and spinning have had anything to do with that? No.... :)

Anyway, let it be said that I am not an entirely serious person. And I love girlie things. I have been leafing through the mags, checking out clothes and looks, wearing mascara, and not forgetting to accessorize. People who see me in person probably wouldn't notice all that great a difference, but secretly it makes me extremely jolly. All this research and craftsmanship, though, do consume a certain amount of time, time when I could have been making diligent knitting progress. A wet manicure and a knitting project, for instance, do not mix well at all.

Maybe it's just a summer fling. But, for now, all too often, knitting must wait. Of course, all this is by way of explaining why things are creeping along at a snail's pace.

I can at least tell you about a decision made. I've decided the next project will be from the turquoise/purple/gray handspun. It seems to be calling to me now. After all, I've always pictured this yarn in a Chanel jacket, so there's a fashion connection. :) And it's suitably bright to accord with my current urge for self-decoration. 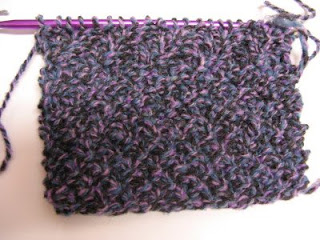 I've gone ahead and done some swatching. The handspun turns out to be a bulky yarn, best knit with US size 11 (8 mm) needles. It's interesting how a fairly organized looking yarn, with the three colors spiraling in a barber-pole effect, becomes a crazy every-which-way mix when knit. It's hard even to tell where the stitches begin and end.

Can you tell the swatch is three different stitch patterns? The bottom third is in moss stitch, the middle bit is in double moss stitch, and the top part is in a sort of improvised diagonal twill. In the picture, it all looks like a fine old mess, but in person, I think maybe the double moss stitch has the right balance of nubbiness and chaos. 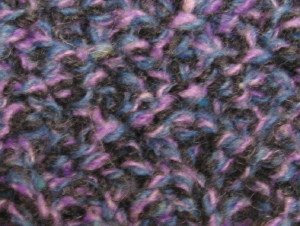 For a Chanel jacket, luckily, texture is good. This yarn all by itself is a wild party of texture. (Note for later: with this yarn, a row counter might be a very, very good idea.)

What I'd really like to knit with it is Mary Heather Cogar's Chanel-ish Cardigan Jacket (there's a pretty one, slightly modified, on Koolsheep's Knit Blog, here). The pattern is in Greetings from Knit Cafe, by Suzan Mischer. Of course, it will have to be a loose adaptation of Mary Heather's pattern. Hers is in two colors of worsted weight yarn in a stitch pattern reminiscent of a houndstooth check. With this yarn, I somehow don't think it's going to need a colorwork stitch pattern, and I'll have to adapt the gauge to bulky. But I think there's a good chance it will work out.

I'm going to give it a good try, anyway. With enthusiasm. And the right accessories. :)
Posted by cathy at 10:33 PM 1 comment:

The knitting has been slow lately. I do have a little something finished that I'm looking forward to showing you. But it will have to wait just a bit, as I don't have a photo to use yet. Until it was done, to break through procrastination on doing the scary finishing work, I had to ban myself from casting on any new projects.

Of course, somehow I did still manage to sneak in spinning and dyeing the Black Cherry sock yarn. After all, I have to get tuned up for the Tour de Fleece, don't I? (Don't answer that.) But no knitting. 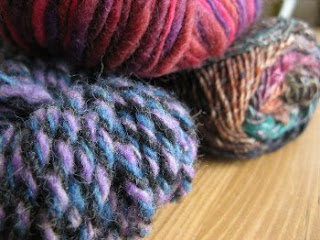 So here I am with nothing at all on the needles. Well, virtually nothing, anyway. (There is one unfinished object that's been pushed deep into the back of my consciousness, but that one will keep.)

I'm in that delightful state of uncertainty and anticipation, daydreaming over the possibilities. I think this time it must be a sweater for me. I'm feeling greedy. :) And I'm longing for color.

Here are the leading contenders. All are in the worsted to chunky weight range, and I have a sweater's quantity of each. 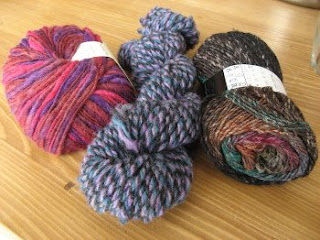 On the left is some Debbie Bliss Soho yarn, in reds, pinks, and purples. I found it in a sale bin at Stitches East, marked down to half price. It's a loosely spun singles yarn, slightly thick and thin, nice to the touch. And the colors really reached out and grabbed me. I've done some desultory swatching with it, from time to time, and most of the fancy stuff is swallowed up and overcome by the colors and texture of the yarn. It is no respecter of stitchwork. It will probably need to be treated fairly simply, in a design that won't compete with the yarn's surface interest. I don't know what that is yet. The Debbie Bliss patterns I've seen for this yarn tend to be turtlenecks, some of them accented with cables that seem honestly, even in the professional photos, to disappear right into the maelstrom of the yarn. So something fairly plain, perhaps with an interesting shape.

In the middle is the candy-striped yarn in turquoise, lavender-purple, and charcoal gray. This is my handspun 3-ply yarn, the progeny of last summer's Tour de Fleece spinning marathon. It's reasonably nice-looking, which is amazing, because I spun it from some pretty ratty fiber. (A poorly chosen impulse buy of a "bargain" at last spring's Maryland Sheep and Wool festival. Don't get me started. :) It's a rather hard and nubby-feeling yarn, but it's undeniably colorful. I actually think, though, that those attributes would work really well in a Chanel-style jacket. In something like a moss stitch, I think it might create much the same effect as the nubby, highly textural, raucously colored tweeds often used in Chanel jackets. And the yarn's hard firmness might be an asset, as a jacket like that needs some body. I thought it might look good with a solid charcoal edging. I'd be delighted to triumph over a bad purchase by producing a good sweater.

Last up, the yarn on the right is Noro Silk Garden, a lambswool, silk, and mohair mix, with a slightly crunchy feel. This too could be a vindication of sorts, over a past experience with Noro. On that occasion, I was surprised by some jarringly contrasting colors showing up unexpectedly in the signature long repeats of the yarn. (This was not a happy discovery. Again, don't get me started. :) This time, though, I'm wise to Noro, and the skeins have been thoroughly probed and investigated. These colors truly are the ones I wanted. Because of the fascinating long color changes, this too will probably do best in a simple design. I'm picturing it as a longish but sleek cardigan, perhaps with inset pockets. 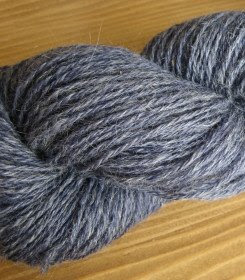 When last heard from, my first handspun sock yarn looked like this. It was a pretty color, but just a bit sober and practical. It looked nice with jeans. I think our Puritan forefathers would have approved.

I, on the other hand, wasn't so sure. I was pleased with how well the spinning had come out, and I liked the fiber, a blend of Blue-Faced Leicester and mohair. Somehow, though, I couldn't get excited about knitting it into a pair of socks. Maybe a pair of denim-colored socks just seemed too much like something I'd go to the store to buy because I needed them. Ho-hum. Oh, excuse me, I nearly dropped off to sleep there for a second. :)

I thought a first pair of handspun socks ought to be more fun than that. I started toying with the idea of overdyeing the yarn. Overdyeing can produce nice results, depending on how the old and new colors work out together. Of course, there's a risk of coming up with something muddy-looking instead. But I happened to have several packets of Kool-Aid drink mix on hand in Black Cherry, a flavor I hadn't tried dyeing anything with before. (Let's be honest; I certainly didn't buy it with any real intention of drinking pitcher after pitcher of Black Cherry Kool-Aid this summer.) I was feeling adventurous, and I decided to give it a go. I resolved to love the result no matter what it looked like.

I consulted my latest favorite book on the subject, Teach Yourself Visually: Hand-Dyeing, by Barbara Parry, the colorist behind Foxfire Fiber. (Wonderful book.) I made a simmering potion with four packets of Kool-Aid and the nice blue yarn and hoped for the best. 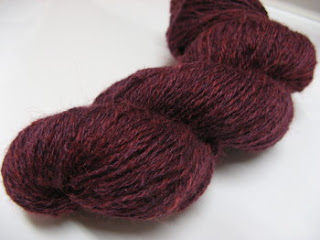 And it worked like a charm. It came out like this, not muddy at all, but a deep purplish cranberry color.

In fact, everything went much better than in my earlier experiment a while back dyeing unspun fiber with Kool-Aid. That first time, the loose locks of wool didn't want to take up the dye and were still shedding color in the rinse-water afterward. I concluded eventually that the mostly-unprocessed wool still had a lot of lanolin in it that interfered with the bonding of the dye. This time, by contrast, the wool seemed to vacuum up intense color as soon as the water hit the right temperature. It made me feel like a pro. 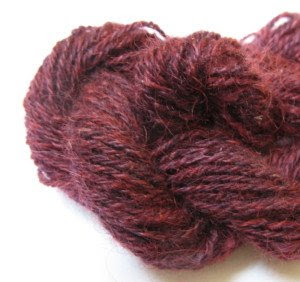 The new color has agreeable variations that you can sort of see here. In the original blue color, I had noticed that it looked like only the wool had been dyed, while the blended-in mohair fibers had been left a natural off-white. I think that's what gives the new color its depth. It's a truer dark cherry red where the Kool-Aid dyed the natural-colored fiber and a purply cranberry where it struck the blue.

I find it ravishing. All of a sudden, the thought of knitting this yarn into socks seems a lot more interesting to me. 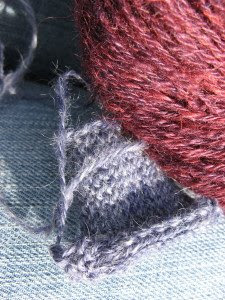 I'm just not so sure how well it's going to go with jeans. :)