Knitting on the Darkside

No, I haven't suddenly gone moody on you. 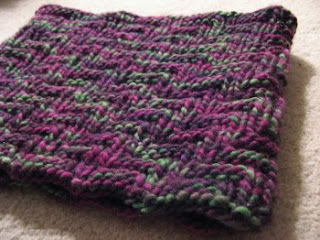 It's just that I made a quick project on impulse called the Darkside Cowl, by Sarah Fama. It's a simple and straightforward free pattern, available here.

I had almost a full skein of Malabrigo worsted weight yarn in colors a friend had admired, and I'd been looking for a pattern to make her a little something nice with it. A single skein of yarn didn't give me a lot to work with, but I'd seen lots of nice cowl patterns that don't require a lot of yardage, so that seemed like a good option.

The challenge was to find something that would work well with the contrasting multi-colored yarn while not being ho-hum and plain. I've certainly found that to be a tricky balancing act many times when trying to find an interesting stitch pattern for a beautiful skein of sock yarn in a busy colorway. I spotted this cowl looking soft and cushy in a solid color on Beate's Cloudberry Knit blog and tracked it down.

The yarn has short color runs of strong greens, purples, magenta, and a more muted plum. (The colorway, which I think is discontinued, is called "239 saphire magenta.") The Darkside Cowl uses a zigzagging rib/welt pattern, identical on both sides. Squinting appraisingly at the stitch pattern, and comparing it with my yarn, I thought it just might work. I was hoping it would highlight the color changes in interesting ways without making a muddled hash of the whole thing. 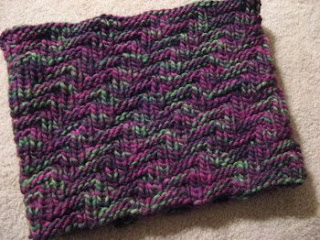 I crossed my fingers and cast on. (This complicates the cast-on process unnecessarily, however, and I don't recommend it. :) And wonder of wonders, it worked! The colors mix attractively and weave and dance around each other without tripping over their feet.

And, as I've experienced before, Malabrigo is some of the most unbelievably soft yarn to knit with. It's really hard to imagine what kind of secret could make wool feel like this. It's luscious, and combined with the textured stitch pattern, it made a cowl that I just wanted to squeeze like Mr. Whipple with a roll of Charmin'. 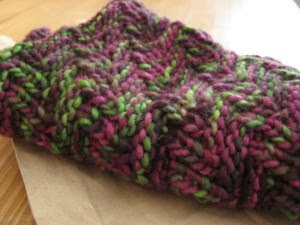 All that fun for only a couple days' work. It almost doesn't seem fair.
Posted by cathy at 9:12 PM 4 comments: 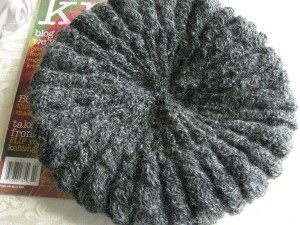 Snow on top of snow. It's been quite a winter. Beautiful to look out upon, though a little challenging to keep cleared.

And when you're snowed in, there's lots and lots of time for indoor hobbies like knitting. I took a little blizzard break and knit myself a new handspun hat! 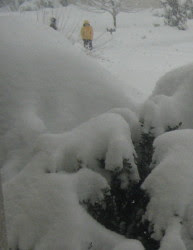 When there's a good deep snow on the ground, it's fun to bundle up in hats and boots and go out stomping around. When the novelty of shoveling wears off, there's plenty of entertainment to be had in watching the plows, taking pictures, or just playing.

Somewhere along the way, I noticed that, for an enthusiastic knitter, I have a distinct shortage of hand-knit hats. In fact, only one: a petite little beret with a coordinating ruffled scarf. But everywhere lately, I've been seeing oversized, slouchy berets. And though big hats are sometimes not a good look for me, I thought I might not look so much like a mushroom in one that droops down. I suddenly wanted one.

I decided on a heavily cabled slouchy hat that I'd been admiring in the Fall/Winter 2008 issue of knit.1 magazine. It's called the Relm tam and was designed by Jared Flood. On top of liking its tweedy good looks , I thought it would make a good handspun project for one of the smaller quantities of spinning fiber I have on hand. 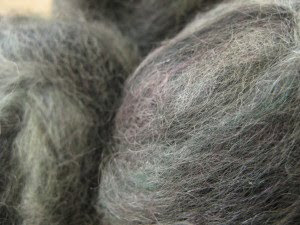 I settled on the fiber from Puff the Magic Rabbit that I bought last fall at the Shenandoah Valley Fiber Festival. When I visited Puff's site just now to make sure of the link, I got a surprise. While I thought -- and said in my last post -- that the fiber was her Electra Blue colorway in merino and mohair, from the photos on her site it's pretty unmistakably For Erika, instead. So what I have here is actually natural dark gray Border Leicester with a little silky mohair in pale blue and lavender! 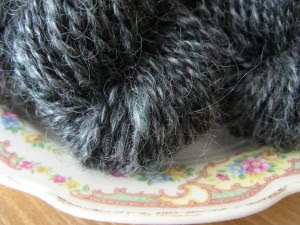 It's beautiful stuff, either way. I spun it into a light worsted weight two-ply, trying for a decent amount of twist. It's not quite as twisty as I was aiming for, but I didn't do too badly. This was my first time attempting to spin exactly the yarn I wanted for a particular pattern. Up until now, I had just spun the fiber however it seemed to work best and then figured out what to knit it into.

The pattern calls for 100 grams of a yarn that adds up to about 300 yards. I thought I would be safe, since I had more than 150 grams of fiber. Well, I must have spun a much denser yarn than the one called for, because I ended up with only 230 yards of handspun. I crossed my fingers, hoping for the best, and pressed on. It was a big slouchy hat, after all, and if I ran short I could always regroup and make it into a smaller, less slouchy version. 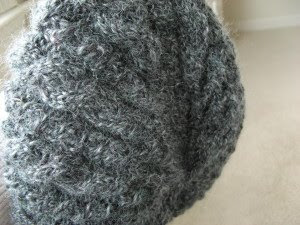 The handspun yarn worked well in the pattern. The fiber's color variation gave it a heathery look that suited the cable pattern, and the mohair in the mix gave it some drape. The cable-work doesn't show up very clearly, because of the fuzzy bloom of the yarn, but it looks thick and furrowed and handsome nonetheless.

The pattern is elegantly designed, showing the signs of a perfectionist in the careful choice and placement of decreases as the cables narrow into the center. But it is big. As the knitting progressed, I did end up making it smaller. It wasn't for lack of yarn (though I actually do think I would have run out). No, it was because the way it was shaping up, it would have made a really giant hat. Enormous. Beyond slouchy. I think it would have been lounging on my shoulders. 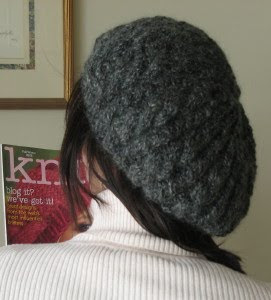 I ended up leaving out two repeats of the cable pattern to shorten it up considerably. And it's slouchy, warm, and big without being overwhelming. I am all set now to venture back out, find a cafe, and park myself at a table with a book and a steaming double espresso.