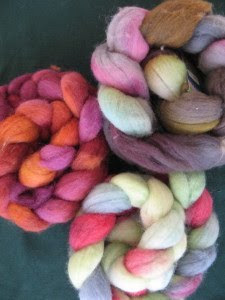 've been in the mood to spin. I didn't have a real project going, but sometimes that urge to spin is well nigh unstoppable.

I wanted to spin so much that I began spinning the beautiful little bits of stuff that I'd felt were too nice to use up. Or maybe that I wasn't a good enough spinner for. It didn't matter.

I had some braids, from the Shenandoah Valley Fiber Festival of 2007, of hand-dyed fiber by Fleece Artist, of Nova Scotia. Only 50 grams of each. I think I loved them for their beauty just as they were. Those colors! But their time had come. 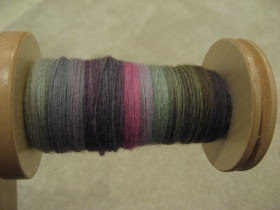 First was the braid in the upper right corner, merino top in soft lavender-grays and greens and pinks. On the bobbin, the colors somehow separated and strengthened. 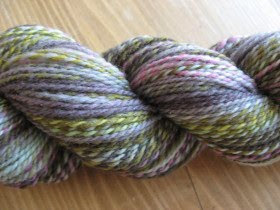 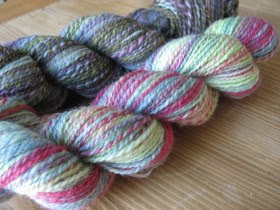 That was so much fun, I had to have another. Next, I spun the braid of Bluefaced Leicester wool in the lower right corner, the one in pink and gray-blue and creamy vanilla. I spun it at a fingering-to-sport weight again. I enjoyed watching the colors draw out, emerge, and mix, and liked the result so much that I wondered how I could have waited so long to spin the fiber. 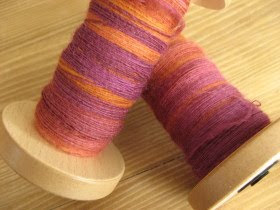 It seems like it must be tiresome listening to me rhapsodizing fuzzily about one fiber after another. So about the last braid of Bluefaced Leicester, I'll just say that I kept thinking of tangerine and raspberry sorbet as I was spinning it. It made me hungry for dessert. :) 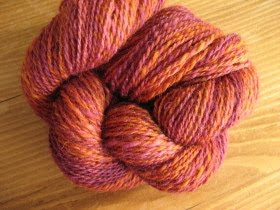 The plied skein is a little darker and stronger, but still, it surprised me when a friend commented, "that's a good autumn color." Of course, she's partial to the brightest of the bright, so perhaps that had something to do with it!

Incidentally, the finished yarn of Bluefaced Leicester wool turned out a little differently from the merino. Still fluffy, it has a bit less bounce and more drape. And both were nice to spin.

So I have 50 grams each of yarn in three colorways, and pretty much no idea what I will do with these small quantities. (Although I must say that a friend has been admiring that merino skein so vociferously that I might just decide to make a gift of it to her.) They're not enough even for a scarf. I need some itsy bitsy projects to make with my itsy bitsy skeins. I think the longest one is about 150 yards. Though I'm a bit short on the yardage, there's a pretty cowl in the latest issue of Spin-off magazine made with about two ounces of sport-weight handspun that just might work. Perhaps I'll make a wardrobe of fine-gauge cowls!

But the question is, what on earth gave me these wild spinning urges?
Posted by cathy at 9:46 PM 5 comments:

Eloise is a charming and inquisitive little girl, in a beloved series of children's books from the middle of the last century, who lives in the Plaza Hotel in New York.

Eloise is also the name of the pattern I've just finished knitting. It's a little cardigan fr 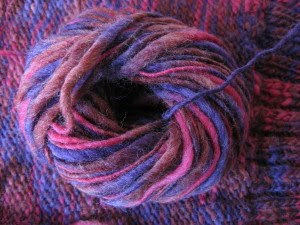 om the book, Noro Knits, by Jane Ellison. The sweater is designed for Noro's Blossom yarn, a nubby textured silk blend in a chunky weight. I, however, had a couple of bags of Debbie Bliss Soho yarn and was looking for a suitable sweater to knit. Soho is a thick-and-thin wool singles yarn, multi-colored with short, busy color runs. (It's now discontinued.)

I searched for a long time for something to make with this yarn. With so much going on in the yarn itself, it doesn't suit an elaborate design. I swatched some cables and some openwork stitch patterns and, with few exceptions, it swallowed them alive. The Debbie Bliss patterns I found designed specifically for this yarn did include a few simple cables, but, honestly, you can barely even see the cablework. So, clearly, it needed to be something fairly plain. But I didn't want to bore myself silly.

I stewed over it, looking at patterns, thinking about designing something, for a long time. Months. At the same time, I'd admired the Eloise sweater regretfully every time I leafed through my Noro patterns looking for something to knit with a Noro yarn that wasn't chunky weight. It's a simple reverse stockinette cardigan, with a deep bottom ribbing and a knit-in edging. Finally, on the relieved and carefree day after Christmas, I put two and two together -- chunky simple pattern with no yarn? chunky multicolored yarn with no pattern? Why not give it a try? Ready, after weeks of gift-knitting, to start on something for myself, I went right ahead and cast on. 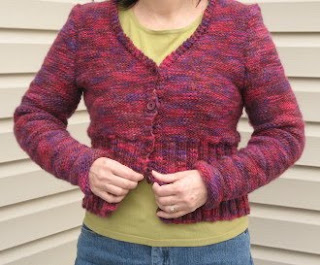 I actually don't know why I liked the Eloise pattern so much. You can't see much of it in the pattern book -- there's only one photo, and it's one of those artfully posed ones that, while stylish, leaves much of the sweater to the imagination. But like it I did. And, lo and behold, I like the finished sweater a lot, too!

I knit it on US size 9 (5.5 mm) needles and knit the pattern pretty much as written. I did decide to knit the small size for a snug fit, but using the lengths from the medium size so it wouldn't be too petite. I also added a couple of extra stitches when switching from the ribbing to the stockinette section, but as it turned out, it really didn't need them.

One of the things I like is the reverse stockinette surface that mixes and blends the colors in the yarn. I was surprised, though, by how little effect the thick-and-thin texture of the yarn had on the appearance of the stitchwork. You really can only see the variation in thickness in the ribbing. 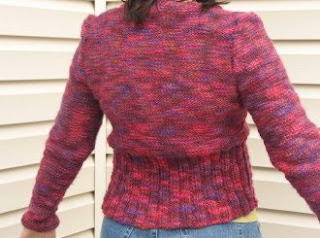 There is one thing about the pattern that I would definitely change if I knit it again. It has no back neck shaping at all. Notice how that makes it bunch up in the photo? Maybe you can get away with that in the Blossom yarn, which probably has more drape from the silk and mohair in the blend. But Soho has more body than drape, and so it sits up there instead of hanging. It's not a big deal, and I have yet to block the sweater, which may help smooth it out. But I'd definitely add some shaping if I had it to do all over again.

My choice of buttons also gave me some temporary worries. I went hunting with my swatch and was happy to find buttons in the perfect color. (This was not a foregone conclusion, by the way, for a sweater knit in fuchsia, purple, and rust yarn.) The only hitch was that they did not come in a large enough size. I kept looking at other options, but I had fallen for these buttons and no others would do. As expected, they were too small, and, once on the sweater, wouldn't stay buttoned. But in the end, I was able to tighten the buttonholes up with an overcast stitch around the opening, so all is well.

So little Eloise has gotten out of the hotel, perhaps taking a taxi, and gone to Soho, where she has had a little adventure, been looked after fondly by everyone she meets, and then made it safely back home. I only wish she'd managed to use up about five more balls of yarn. (It was sale yarn -- I had a lot. :)
Posted by cathy at 5:07 PM 3 comments: