The cyclists of the Tour de France wound their way yesterday to their grand ceremonial finish down the Champs Élysées in Paris, tired and a little battered, but relaxed and beaming with exhilaration at having made it all the way through an incredible 2,200 punishing miles of racing. (I think I said 1,200 before, but I should have checked first!) Just finishing is a signal accomplishment.

Rastro and I, likewise, made our tired but happy way to the finish of the Tour de Fleece yesterday. Along with a few hundred other intrepid -- or foolhardy -- spinners, I set my sights on a goal of spinning every day during the Tour de France, and maybe meeting some personal spinning challenges. I didn't set a fixed goal for quantity. I just set out to spin as much as I could of my remaining pound and a half of lump-bedeviled bargain roving in pursuit of an eventual sweater. The colors combined to make a surprisingly pretty three-ply yarn.

Here's a short retrospective on my Tour de Fleece. 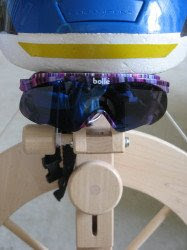 Rastro was suited up and feeling competitive. 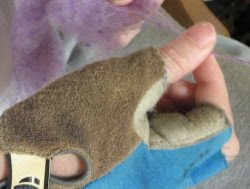 After all, being properly outfitted is so important, isn't it? 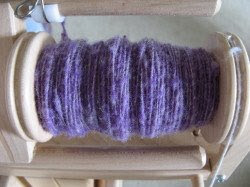 After the first day's spinning, we were starting to get warmed up. 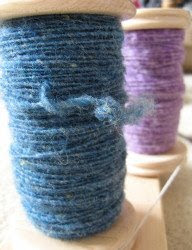 We swung into our rhythm and started to make progress on the early stages. 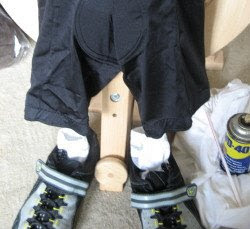 Oops, a spot of equipment trouble. Just a pesky squeak, it was soon put right by the support team. 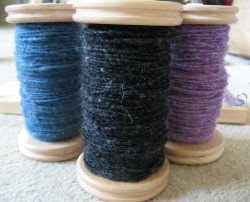 The road stretched on for miles ahead, but we started to put some distance behind us. 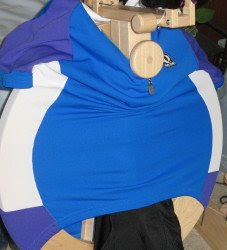 Rastro was careful to load up on carbohydrates for energy during the race. He may have overdone it. 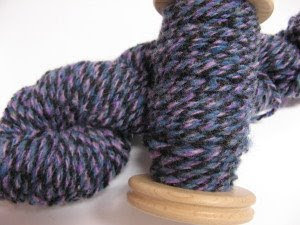 The terrain changed as we started to get into the first mountainous climbs of the Pyrénées. 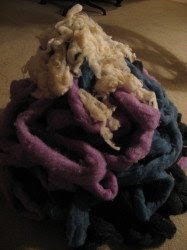 Beyond lay the formidable Alpe de Nepp, a craggy and snow-capped edifice better known as old Mount Lumpy. The ghosts of spinning wheels past shadowed its mighty flanks. 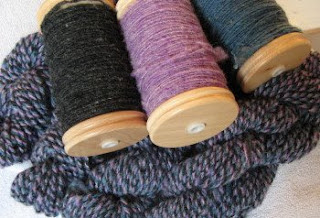 We peddled hard and made it through the high mountain ranges. 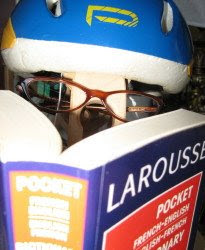 Rastro began to indulge fond and foolish dreams of victory and practiced his speech for the podium in Paris. 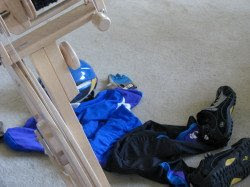 But then a serious reverse struck -- rider down! -- a business trip, several days away from home. 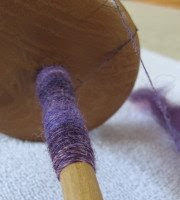 Luckily, it was nothing a Band-aid or two wouldn't fix. We would just have to make do with alternate equipment until we could get back to the wheel. We pressed ahead as best we could, spinning Shetland top into laceweight on the spindle.

Finally, ahead of us stretched the storied boulevard of the Champs Élysées, and the stunning backdrop of the Arc de Triomphe. We'd made it! We certainly were not the fastest; some of the Tour de Fleece spinners cranked out prodigious amounts. We just kept going steadily day after day, undeterred by busy schedules, travel, and a rather sore knuckle developing on one forefinger. Inspired by the real cyclists, encouraged and buoyed by the camaraderie of fellow Tour de Fleece members, we kept at it throughout the entire three-week course, plugging away at our own personal challenge. 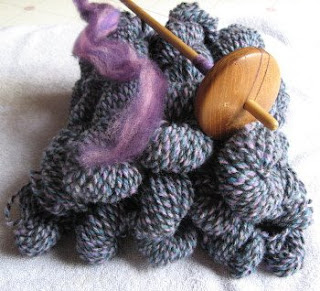 And here's the reward. Rastro and I spun about a pound of heavy- worsted weight three-ply (leaving a half- pound to go) and a smidgen of Shetland laceweight.

Now perhaps it's time to have a glass of Champagne and give that sore knuckle a few days off!
Posted by cathy at 11:14 PM

Oh that photo spread is utterly darling! Congratulations on victory.