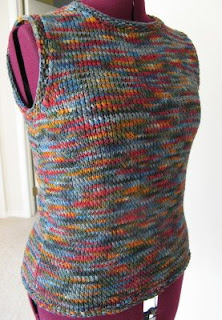 After a careful project like the Cherry Leaf shawl, I guess I must have needed a quick one, because here I am all of a sudden with another finished object.

I found myself attracted, earlier this summer, to the Crossed Laces tank top by Beth Whiteside, in the Summer 2008 issue of Knitter's magazine. Knitter's is a worthy magazine that publishes patterns by big name designers and puts on the estimable and wildly fun Stitches events. But I have to admit I occasionally find something mildly off-putting about the designs themselves. I can't put my finger on exactly what. Perhaps it's the color choices.

The Crossed Laces tank, on the other hand, is a very simple pattern given excitement by the masterfully nuanced colors of the Colinette yarn it uses (greener-looking in the printed magazine than in the link above). I am helpless before these colors. The model's smoldering expression, cascading hair, and the perfectly contrasting bead-decorated skirt the top is shown with probably don't hurt any either. Yes, I can be drawn in by such things, even when I'm fully aware that I'm being played like a violin. So I knit away on other things, but kept flipping back to that pattern to take another look. The yarn called for is Wigwam, a cotton tape yarn, hand-dyed like all of the Colinette line, in the Toscana colorway. I visited a couple of local yarn stores, casually sightseeing, hoping to see this unfamiliar yarn and get an idea of what it's like. But neither stocked it. I did see a single skein in one shop, but it turned out to be a loner, there only as part of an afghan kit of mixed yarns.

Finally, I could stand it no more. I had to have that tank top. I started shopping seriously, zeroing in on sources. It turned out that, here in the US at least, Wigwam is pricey yarn. Even the relatively small quantity needed for a sleeveless top was enough to make me stop and think. I found a good buy on the yarn, but with only a few colorways to choose from. After a little pondering about whether I'd be content with anything other than the colorway shown in the magazine (come on, have I no imagination at all?), I took a chance on one. 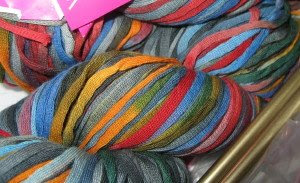 I chose a colorway with lots of tones of blue and green and gray and red, and dashes of yellow. It's called Pharaoh. Why, I wasn't sure. When I think of ancient Egyptian paintings, it's all fluttering white linen and kohl-rimmed eyes, and lapis lazuli. Pharaoh arrived before long, and the colors were deeper and stronger than I had pictured. The yellow in particular is a hot saffron color, and the blues and reds are dark and bold. Now that I think of it, though, those colors are quite in keeping with some of the artifacts in the fabulous King Tut exhibit now closing in London and making its way to the US. It's not a colorway that I would probably have chosen for myself, had I been able to see it in person, but it has gotten me away for once from the typical palette I gravitate to, so why not? 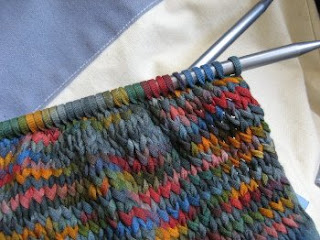 The Wigwam yarn itself looks a lot like linguini and feels much like a stretchy shoelace. The Crossed Laces pattern is all done in twisted stockinette, which with the cotton tape creates an interested furrowed texture. Too, I seem to remember reading somewhere that knitting in the Near East was often done in a twisted stitch, an inconsequential but obscurely satisfying tie back to the (had I but known) aptly-named Pharaoh colorway.

It wasn't the most flowing knitting; it was done on US size 11 needles, and the crossed stitch tightens the loops so it doesn't slide along as readily. But it knits at a chunky gauge and goes quickly. I decided to make it in a size with a couple of inches of negative ease, and I'm very glad that I did. If I had made it larger, I think it would have hung like a bag. (In fact, I believe I could even have gone another size down, for a more form-fitting look.) As it is, it's heavy and slinkily stretchy, and it clings slightly but attractively. 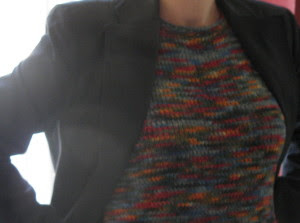 I love it. And the colorway combines well with a lot of things, from jeans to jackets for work.

Since it turned out well, I can't help thinking about that Toscana colorway. Maybe a second one would be nice....
Posted by cathy at 11:30 PM

Very, very, nice. Your version has outdone the magazine's !!!