After last weekend's spinning workshop, I was so excited that I kept right on spinning that night and the next day, until a tired thumb on my drafting hand told me it was time to stop. But still I could think of nothing but spinning and handspun. So I set to cataloging my handspun skeins and counting up the yardage. I just needed an idea of what could be knitted from them.

Lovely Dalis at Dancing Leaf Farm pointed out a little book called Noro Designer Mini Knits, by Jenny Watson, as a good source of small projects that could be adapted for handspun. 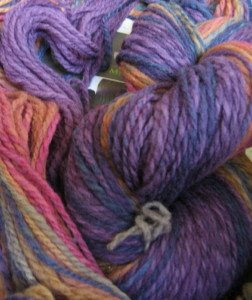 This yarn in particular was a pretty thing I'd been wanting to make into something nice. I'd tried starting a shawl with it, some time ago, but it just wasn't right. This was some of the first of my handspun that I'd ever knit a stitch of, and I was frightened of making a mistake. After I backed away from the shawl idea, it just sat on my coffee table looking decorative. For a long time. A long time.

I spun the yarn over a year ago, from 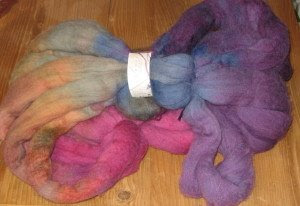 this luscious hand-painted roving. Of course, I suppose more precisely it's wool top. (For non-spinners, that means it's been prepared by combing instead of carding, so that the fibers are more smoothly aligned.) I know some people are very unhappy with those who refer to any kind of thick rope of prepared fiber as roving. But roving is such a nice word, and I suppose I'm a bit of a carefree phillistine about the difference, at least for now. After all, I'm still pretty new to all of this. It seems a bit like expecting someone to speak of cars as coupes or sedans when he's just getting used to the idea of a wheeled motorized vehicle. I expect I'll get better about my terminology as I go along.

Anyway, I had 10 ounces of the wool ...top. It was from Lorna's Laces, in the Watercolor colorway. I had bought and spun it simply for the fun of working for the first time with a pretty hand-painted ...top. I was still practically a novice, and this is the ...top that taught me how to spin softer yarn.

It was such pretty fiber, and I spun it happily, expecting a beautiful yarn. I didn't split the fiber; I just enjoyed the colors and the long transitions I got by drafting from the entire thickness of the ...top. I was also working on spinning consistently at a heavier weight, and aimed for a thicker yarn than my beginner efforts. But when I plied the first skein, I was disappointed in the result. The yarn was kind of dense and firm. Even the colors seemed flat. I had enough experience by then that I had developed some ability to control my spinning, so I decided to try putting less twist into the yarn, hoping it would be softer. 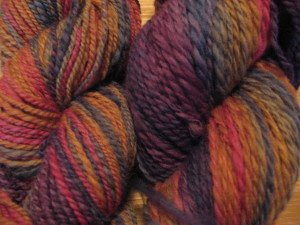 What a difference that made! You can see it in this photo. The skein on the left is the first one I spun, about worsted weight and, sadly, a little hard. The one on the right is what I got with a lot less twist. It was bulkier and much softer.

I was much happier with the yarn after that. But the evolution in the yarn made for a challenge in coming up with a suitable project. I had about 500 yards, about 2/3 of it in the soft bulky yarn, and 1/3 in the firm worsted weight.

Nevertheless, this time I was gung ho and ready to try something. Looking at projects in bulky yarn from the Noro book, I found a simple pullover cropped vest that looked like I could make it with plenty of yardage to spare. I was in the mood to just dive in, so off I went. 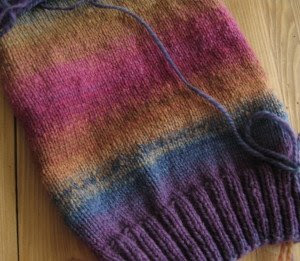 I knit merrily along and soon had this. Although the long color transition was interesting, I did not love the overall effect. The pattern was written for Noro's Blossom yarn, which has a lot of textural interest (and maybe some bits of leaf and twig, from the looks of it). But in my handspun, a smoother yarn, it was a bit blah and seemed to need something. So out it came.

After a little more swatching, I decided to loosen up the gauge and add some bands of moss stitch. 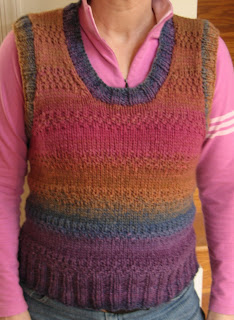 That did the trick.

It even worked out so that I could use the soft yarn for the body of the vest and the thinner yarn for the neckband and armbands.

I ended up using about 450 yards of bulky handspun, with US size 10 (6 mm) needles. In addition to adding the stitch pattern, I lengthened the vest a couple of inches, made the scooped neck deeper, and made the neckband and armbands narrower.

It went so fast, I had it done in six days flat. I couldn't wait to wear it right away yesterday, not even holding off to block it first. World's-most-patient-husband and I were out and about and stopped by for a visit to the Yarnstruck niecey and nephews. Showing impeccable taste, my little niecey immediately spotted my vest and complimented it. I might have attributed that to tact rather than taste, had there been so much as a hint that it was one of Auntie Yarnstruck's projects. No, clearly little niecey has excellent taste. :)

And I'm tickled that finally, in hardly any time at all, the pretty yarn that waited so long after I spun it has turned into a pretty vest that I can wear and enjoy.

Very nice! I like the stitch patterning you did. Added a lot to the design. Great colors! That's one think about buying roving - a lot of sellers just sell each colorway in just 4 oz. amounts and then only have 1 in stock.

So pretty! Thanks for sharing the entire process, definately a well thought out labor of love!

That looks fantastic, Cathy! Great job and I'm always so blown away by handspun garments.

That is absolutely gorgeous!!! Breathtaking!

You go girl! I am in awe of your skill and speed! That is one beautiful vest.

This vest is just lovely. How did you ply the singles to preserve the long colour transitions?

Thanks, Alison (and everyone!) If I remember, I actually spun directly from the entire thickness of the roving to make a long transition. It had two repeats of the color sequence, so I just made one strand from each and then did a basic two-ply. The color changes were so gradual that it was pretty forgiving. Overall, a lucky experiment. :)